In 1893 Vermont Governor Carroll S. Page built the house for his family on the bluff in Hyde Park not far from his boyhood home. A copy of the 1759 Georgian house in Cambridge, Massachusetts, known as the Longfellow House, it also had the latest gas lighting fixtures, a drinking fountain of Vermont marble, and made-to-order mirrored mantlepieces. Many original details have survived the century and the house has been restored and decorated to preserve the gracious elegance of an earlier time. 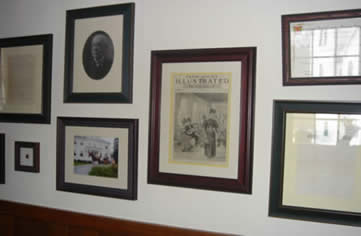 Please check back as we add renovation photos and some history of the mansion. 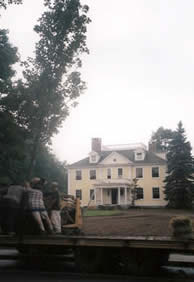 Originally there was a wide tree-lined walkway from Main Street to the front door. The family entrance was through the elegant pillared portico facing the mountains on the other side where a circular driveway approached from the side of the house near the courthouse. The horse-drawn carriage that Senator Page is said to have kept all his life and the family cars were housed in the large barn next door. It had been constructed from materials from some of the 18 houses which had occupied the grounds prior to construction in 1893 and which had been removed to make the spacious site where the house sits. Several of them were moved to locations nearby and remain today. The present driveway, circular entrance garden, and parking lot were added during the recent renovations.  In the process, several good-sized trees were moved and others added, including the sugar maple in the photo. 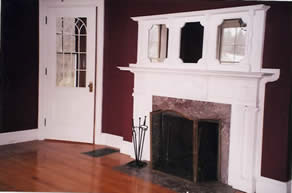 More history and photos to come.